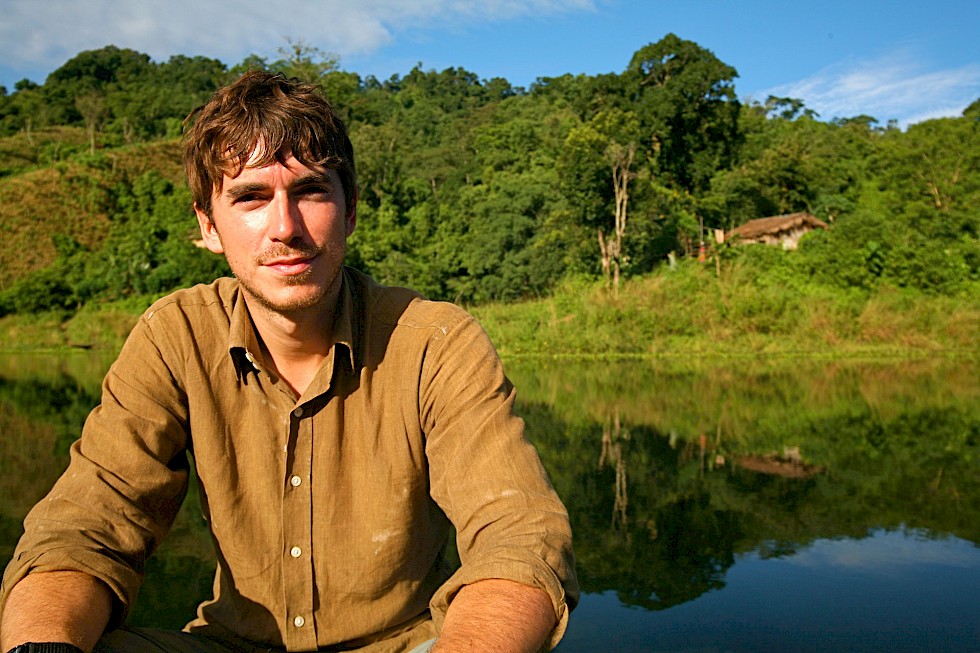 Simon Reeve, documentary filmmaker, author and environmentalist, attended the opening of the brand-new ESC Training Hub as a guest speaker and gave an exclusive interview with East Sussex College following the launch event.

Did you have this passion for the environment growing up?

“No. I come from a very urban area, on the edge of inner London. We had parks, but I wasn’t green at all. I was a naughty boy. I was making petrol bombs by the time I was 11! It was lucky really that it turned out ok for me. I think I’ve come to conservation later in life because when you get beyond the age of thinking about parties and pure fun, you start thinking, ‘Oh, there’s a beautiful natural world out there’. You fall in love with trees and nature, and then you start seeing the threats to it. You start appreciating the context of what we’re doing to our world. You start getting worried first, and then angry. I’ve tried not to be resigned. I try to just stay angry and active. I rattle the cage, but I haven’t glued myself to any runways - yet!”

Was it travelling the world that made you aware of these issues and kickstarted your journey as an environmentalist?

“It’s mainly through my work and the travelling I have done. Obviously travel is a major pollutant as well, but through the journeys I do, we try to understand what we’re doing to our world. We try to capture that on film and show people. I’m totally passionate about it and really believe in it. In some ways I think it helps that I wasn’t bird watching from the age of eight. Maybe I love it more as a result. Also, what I did before TV, writing books about terrorism and all this mad scary stuff, that helps to give you context for my concerns now. Yeah, I’m worried about nuclear weapons and terrorism, but I also know with certainty from what I’ve seen across the planet that what we’re doing to our world is a great threat. I can say it with some legitimacy, because I’ve seen it.”

Do you think there’s been a shift in the perception of green technologies in recent years?

“I think a lot of it is in the Elon Musk timeframe, the clever nutjob that he is! I think alternative technologies are becoming not just sexy, but viable, and are used on a daily basis. Technology has just got a lot better. On the flip side we’ve realised what’s at stake. We’re facing catastrophe if we don’t make this shift. Britain is so terribly denuded of nature. It looks lovely, but it’s a fraction of what it was. We live in a much more boring country now than we used to. There’s much less interesting biodiversity. We need to protect what we’ve got, we need to claw back what we’ve lost, we’ve got to look after our beaches, we need to protect. Renewable energy is all part of that. We have to believe in it, we have to invest in it, we have to study it, train up to use it - this centre is so needed. So needed locally, but we need more around the country. I think ESC should be taking over Britain quite frankly to get more of them out there! It’s mad that we don’t have more of this. If you’re in Eastbourne, you have an incredible opportunity on your doorstep to get involved in one of the biggest emerging industries on the planet. It’s a practical industry, it’s one where you can make a difference.”

Is there a place that stands out where you’ve seen the impact of pollution on the environment firsthand?

“In terms of plastic pollution, one of the biggest shocks for me came years ago. I was travelling around the equator, an amazing adventure exploring life in the tropics and the poorest and most beautiful parts of the world, and we finished the journey in Hawaii. We went to this remote island and this beach was just covered in plastic waste. It was such a sickening sight. They’d actually just had a beach clean and taken 50 tons of waste off it! It just kept coming, and when I dug down into the beach, the plastic was breaking up into smaller fragments, it was becoming a plastic beach. Millions of tiny bits of plastic.

“That was probably the biggest single shock, but I’ve seen it closer to home as well. In Italy, in the Mediterranean, in the European Union that have got similar levels of plastic waste. In Cornwall, when I’ve done beach cleans down there, the beaches in Eastbourne can occasionally be filled with it. It’s something I get angry about as it’s us spoiling our own nest. We’re pumping millions of tons of plastic into the sea every year - that’s a massive area for people to research and get involved in. It is still a beautiful world. A lot of people get the sense that we’ve lost. We haven’t, we still can claw it back. There’s still a lot to fight for, to activate, agitate, demonstrate, vote - we have to be active citizens to fight it.”

Do you think your work helps young people?

“I never thought anyone would be remotely interested in my story. I’ve been on TV for a while, and I think it’s helpful that people know we don’t all pop out of a mould, we don’t all have the best start in life. You can still get through it, not always, let’s be honest - it can be very challenging. I think now more than ever because of what youngsters are confronted with on social media; they see all this incredible imagery and amazing lives. Much of it is fake and airbrushed, and I think they need to be reminded about that to feel better about themselves.”

Tell us a bit more about your teenage years.

“I had a tough start, it was crap for me. I’m not a psychologist at all, but I can say this is what I went through. What helped me wasn’t having a grand plan or going off to university, what helped me was advice I got from the lady in the job centre who said ‘just take things step by step’. That became a mantra for me. You hear it all the time from parents about their youngsters who say ‘I can’t get out of bed, I feel paralysed’. Don’t think too far, don’t look too far ahead. Think of it as being an achievement to get out of your bedroom, think about going downstairs, about going outside - think about going for a walk around the block. The physical act of one foot in front of the other can start to provide some answers. Not for everyone, not all the time, but in my experience for me and for many others.

“I remember with quite frightening clarity what it was like to be 16/17. It was the most frightening time of my life. It was the most frightening transitional experience. People who go to college now, some of them battle these emotions and feelings and are struggling with them. I know that, I’ve been there. It was the most difficult time to leave school. Back then there were less lovely people like you lot, advisors, councillors. I was like, ‘oh my god, what do I do now? Who’s going to show me the way?’. A big thing we don’t take into account now is being at school as an early teen is a scary time. I went to a school and was worried about being stabbed on the way. That’s the same story for a lot of people in urban areas. I didn’t realise that the adult world is a much more welcoming and friendly place!”

What’s been a standout moment for you in your career where you’ve thought that change is really coming?

“A few years ago, I was in the mountains of Chile, in this remote village where they had just put in solar panels. It transformed people's lives. They had no electricity, then they had solar panels put in, and suddenly they had fridges, lighting after dark, they could store vaccines. One family had a washing machine! If you’re a mum of four in a remote Chilean village, a washing machine is a life-changing experience. They had pumps for water too, they didn’t have to walk to the stream to get polluted stuff. It was completely transformative!”

What more needs to happen?

“One of the key points is Energy Return on Investment [EROI), which basically means how much energy does it take to get energy out of the ground, for example? A century ago, for the equivalent of one barrel of oil, you could get 100 barrels of oil out of the ground. Now for one barrel of oil you can only get four or five barrels of oil out of the ground. Energy is going to cost more in the future. We’re going to use it sparingly - regardless of whether Vladimir puts his knee on our energy pipes or not. Renewable is the only option. This is the bloody future!”

What do you hope people take away from your work?

“I hope people learn a bit more about the world. It’s the licence fee that pays to send us away, it’s not a jolly. We want people to understand a bit more about the planet we live on and love it more as a result. I’ve just made this series about South America [Simon Reeve’s South America, BBC iPlayer]. A lot of people will look at South America and think it’s one continent, they won’t see the individual countries, nevermind communities, that live there. I hope people get more of an understanding of that vast area of our world and the issues as well.”

What should we be doing to make a difference?

“We live in a time of issues. We live in a time of staggering change. It’s happening now on our watch. We need to know about it. I want people, whether they’re in Eastbourne or Edinburgh, to understand what’s happening on their planet and to be interested, concerned, and maybe even angry about it. Get involved, realise that we’re citizens in the world where this is happening. We’re so placid now, but even an individual can make a bit of a difference. Just because we can’t do everything doesn’t mean we can’t do something. There are loads of groups who are trying to make a difference and we need that, but we also need people to use their voice and play their part. Get involved, get agitated. That could just be learning. Learn about what’s happening locally, regionally, nationally, play your role and lift your gaze a bit and recognise that you can make a difference to the world. That can help you in your own life.”

Have you been impressed by the ESC Training Hub today?

“Yeah, very! Not just by the place, but the team, the teachers, the college, the chocolate strawberries, the catering crew!”

For more about the Training Hub please visit: