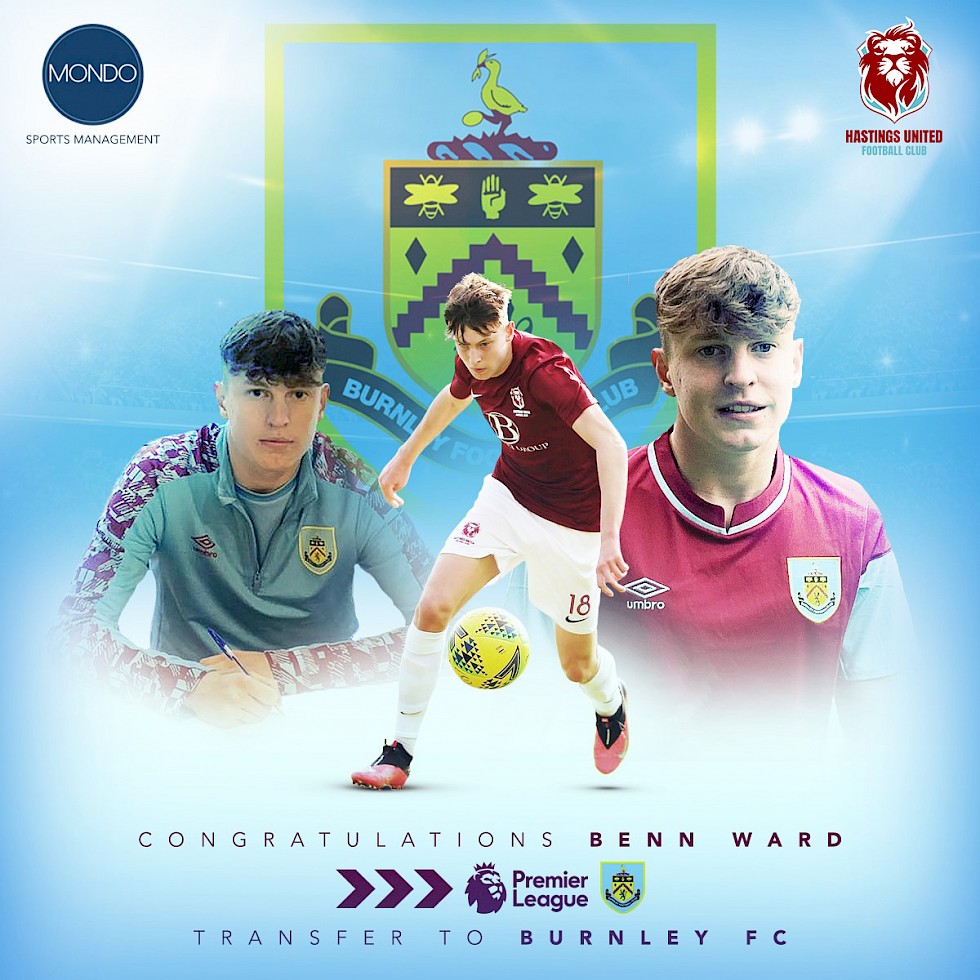 Benn was studying Level 3 Sport at the college and was part of the Football Academy, which is run in partnership with Hastings United and Skiltek. He has signed a two-year scholarship with the Clarets and will join their Academy with immediate effect.

The former Ark Alexandra Academy students had an impressive pre-season and broke into the Hastings United First Team, making 10 appearances this season.

Benn Ward, said, “I am absolutely delighted to have signed for Premier League Club Burnley FC. I was lost for word when I found out, to be honest. I just want to get up there, work hard and not take it for granted. This is my life now, I’m buzzing!

Because I’m under 18, part of my programme will be in education. I’ll be carrying on the Level 3 Sport courses I was doing at college, so I’m really thankful to my tutors who believed in me and helped me knuckle down, making sure I’m ready and not behind on anything.

I’m also really grateful to Chris Agutter (First Team Manager), the Club, and the fans for believing in me and giving me the opportunity to play for Hastings United.”

Craig Ottley, Curriculum Lead for Sport at East Sussex College Hastings, said, "Everyone at East Sussex College, especially the Hastings Sport department, wants to say a huge congratulations to Benn and his family. To secure a move to a Premier League football team is every young footballer's dream, and we're extremely proud of his achievements. Benn has shown, both on and off the pitch, that he is a hardworking, dedicated young man - a credit to all the people who have helped him in securing this move.

The hard work begins now, and we wish him well in his footballing career. We're looking forward to welcoming him back to the Academy to speak to our young aspiring footballers sometime in the near future."

Benn also received congratulations from Billy Wood, CEO Hastings United FC, who said that Benn’s move is another shining example that Hastings United Football Club not only trusts young players to grasp the opportunity but is a club very much on the radar of professional football clubs, highlighting the talent within the First Team and Academy.

The College is extremely proud of the progress the Football Academy partnership has made, since launching five years ago. During that time, the Academy has won promotion to the highest division of college football, and seven players have been on trial with professional football clubs, including Leicester City, Newcastle United, Aston Villa, Burnley and Brentford.

The partnership is set to expand next season with the introduction of a women’s football academy. This means both male and female students from across Hastings, Bexhill and Eastbourne will have the opportunity to excel in all sports. This can be applied to professional football, progression to university, into an apprenticeship or even becoming a sports entrepreneur.

We caught up with Benn just before his move to Burnley to find out a little more about his time at college.

If you want to follow in Benn’s footsteps, then applications are still open for our Sports courses and Football Academy in Hastings.

As we all get ready to go back to college, here are our top tips for doing your bit to stay safe.

Second-year students from the degree course in Hastings have taken to social media to show off their work and skills.

Ali Mohammadi has been offered a place at Brighton and Sussex Medical School and will study to become a doctor.