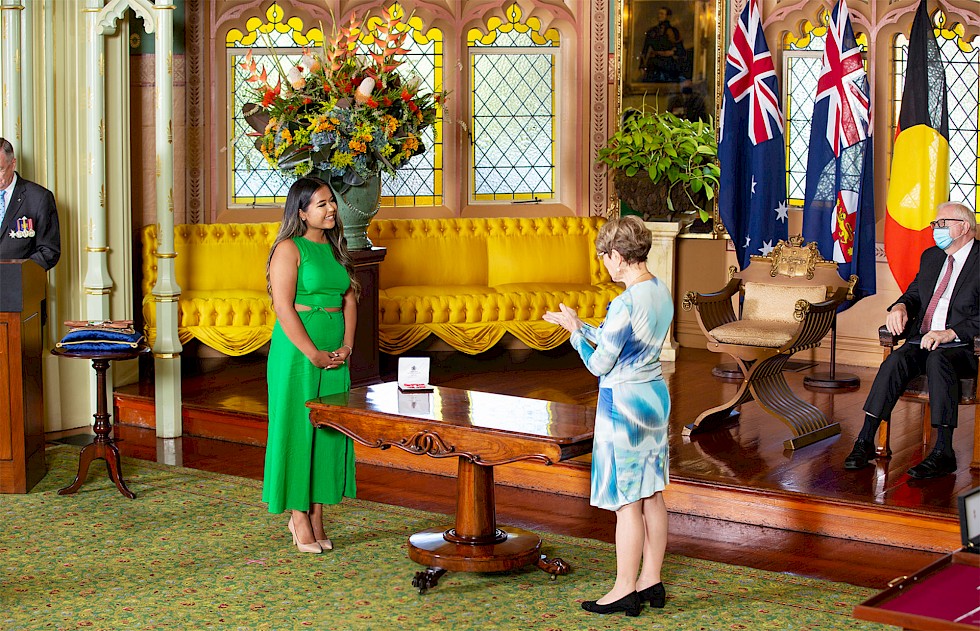 East Sussex College Lewes alumni, Rebecca West, was finally presented with her Member of the Order of the British Empire (MBE) after being recognised on the Queen’s Birthday Honours in 2020.

The talented alumni from Southwick was crowned the world’s best young beauty therapist at the WorldSkills 2019 competition in a spectacular closing ceremony which saw more than a quarter of a million people gather at the Kazan International Exhibition Centre.

In October of 2020, Rebecca was awarded an MBE after her efforts at WorldSkills competition the previous year. However, due to the Covid pandemic Rebecca had been unable to be presented with her MBE.

This month the former East Sussex College student, who is currently living in Australia, was finally presented with her well-deserved MBE to celebrate her incredible achievements.

In an interview with ESC two months after winning the gold medal at the competition in 2019, Rebecca told us, “My journey [to becoming world champion] started while I was at college. I was given the opportunity to compete at the regional heats of the UK Skills competition.

“The moment I found out that I had won [at WorldSkills] was just wow! I couldn’t have done this without my training at East Sussex College. The skills I learned while I was there set me up for the competition without question.

“I started at the Lewes campus in 2013 and began studying Hair and Theatrical make-up, then moved on to Beauty and then I decided to stay on an extra year to complete my Level 3 in Beauty Therapy. I finished in 2016, but I was able to go back to use the facilities and train for the World Skills competition.”

“I wanted to push myself and I knew that this college produces such amazing therapists and I could see from Kaiya's win in Abu Dhabi [at the last WorldSkills in 2017] that the students do really well here.”

To find out more about Rebecca’s WorldSkills story and what skills she developed while studying at ESC Lewes, please watch the YouTube video below.

Another reminder of the College’s outstanding creative prowess

Student Enrichment and Wellbeing teams organised a wide-range of activities