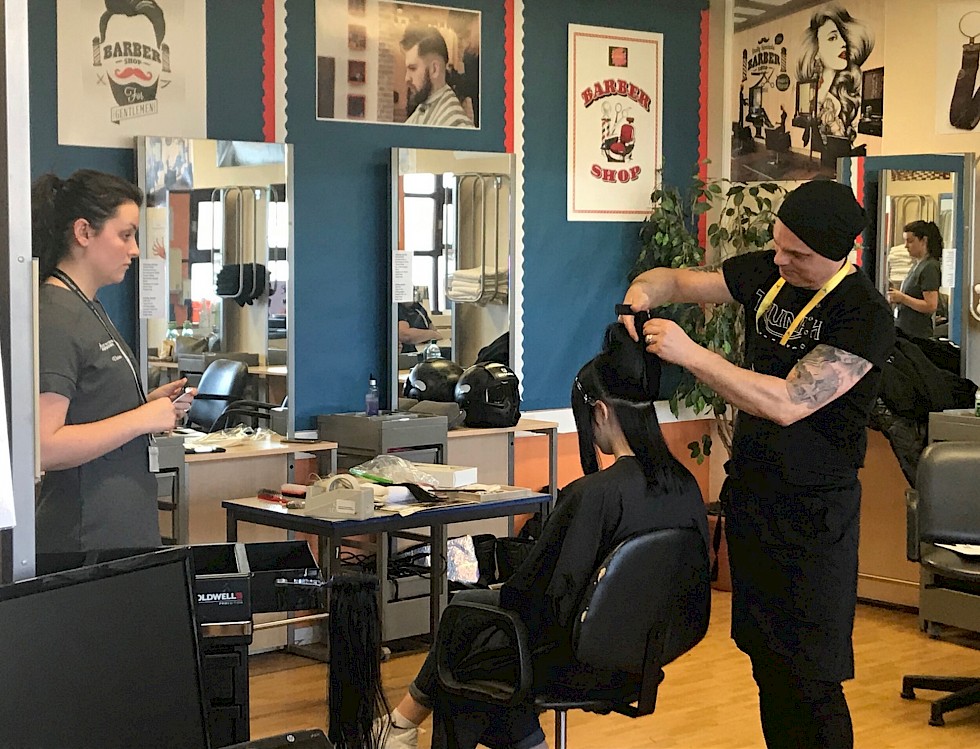 "I’m one of the people who set trends - I create signature haircuts for others in the industry to follow. Some have become very big. I’m always on a creative and artistic team somewhere."

I was at Toni & Guy, who lead a lot on colour trends. I trained with Vidal Sassoon, which is a very different concept to Toni & Guy. At one time, you could tell what haircut was from what salon, and now you can’t. Most of the instructors from the Toni & Guy academy have a background from Vidal Sassoon. And then you have Trevor Sorbie, who trained at Sassoon and worked at Toni & Guy, put the two together, created the wedge in the ‘80s and the rest is history for him.

I created my signature haircut, ‘The Faith’, in 2005, where the back and sides are completely shaved and the top is left long. At one point, it seemed that nearly every man on earth had that haircut or a variation of it. It became one of the biggest haircuts in the world. I think a lot of the barber shops that have opened in the last 15 years have opened on the strength of that haircut.

For a lot of my career I was very anti commercial hairdressing because I found that product companies were almost like the record labels of the music business. Unless you’re working for one of them, no one was going to see what you can really do, unless it had a big brand above your own brand. I started my own brand of products and styling range, independent in that sense. It took seven years on a budget to get the range out there. For me, I hate all the competitions. It’s better than it used to be but if a big brand is sponsoring an award and you’re a big client of that company then you’re likely to win it. It’s the same for the music industry. There are millions of musicians out there who are never going to be known.

A celebrity hairdresser? Who’s he?

It’s an occupational hazard of celebrities that they don’t have very good hair condition as they are always having something done to it for catwalk shows and film and TV. I like styling hair for shows. Hair for shows is easy. Hair for clients is hard. Being creative is easy. You’ve got the products in front of you and all the means at your disposal. Anything goes. The styles you see on the catwalk no one will walk down the road with. There’s a bit of a farce behind it to be fair, but personally I find it easy. Having a client who comes back to you time after time is hard. I’ve had a faithful clientele who have been coming to me for over 20 years.

I thought I knew but I don’t anymore. There’s myself and friends who do celebrities hair. I don’t walk out on the street and everyone knows who I am. Unfortunately celebrity hairdressers nowadays are people who have their name on a bottle of shampoo in Boots, otherwise no-one would know who they were either and what they have done in hairdressing to be a celebrity. It’s interesting to look into someone’s history and see what they are known for, and sometimes it isn’t hair. In London I got fed up with being known for whose hair I do rather than what I do. For me there have only ever been two hairdressers - ever - that have been famous for haircuts and that’s Trevor Sorbie and Vidal Sassoon. One person I trained with in London was Stuart Phillips and he is probably the highest paid hairdresser in the world but hardly anyone knows his name. He’s just signed a five-year contract with the Baftas.

I’ve rapped on stage with the Beastie Boys at Reading Festival.

A lot of people think fame means wealth and unfortunately it doesn't. It does happen. It’s like Grime is one of the biggest music genres in the UK. The guys that have been the most successful come from a really good family; they went to college, and have university degrees so they know how to use equipment in a recording studio, but they’re not gangsters from off the street. You do get the odd ones, sure, but usually these are on the back of someone who did go to university and became good sound engineers. It’s an act to sell music, pretending to be a gangster. BBC3 programme The Rap Game with five budding rap artists. They’re the nicest guys you’ll meet but their music says something completely different. I was a rap artist in the ‘90s. I had a group called 141st Street, which was quite big in the old days of Kiss FM. We were signed to Virgin Records. I’ve rapped on stage with the Beastie Boys at Reading Festival, and I’m not a gangster.

Jal’s fiance, Vivienne Peters “Jal is one of those people who have done everything.

It was all at the same time - rap music and hairdressing. They’re all connected. My influencer was my dad’s family from Brooklyn. I went to school in Harlem for awhile. When you do hair and beauty out there [in America] one of the subjects you have to take is drama, the reason being you have to have the experience of being in front of the camera as well as behind the scenes.

Danny - he was supposed to take over his aunt’s hair and beauty salon. He went to college and liked the drama side more. Sylvester Stallone was an obvious one I think - if you look at the first Rocky film, he had the Cuban heels, the tight jeans, the vest and the hat. I used to dress a bit like that. He looked like a hairdresser!

“The course gives you a lot of skills, not just with video games...

“This course has effectively changed my life!” Online l...