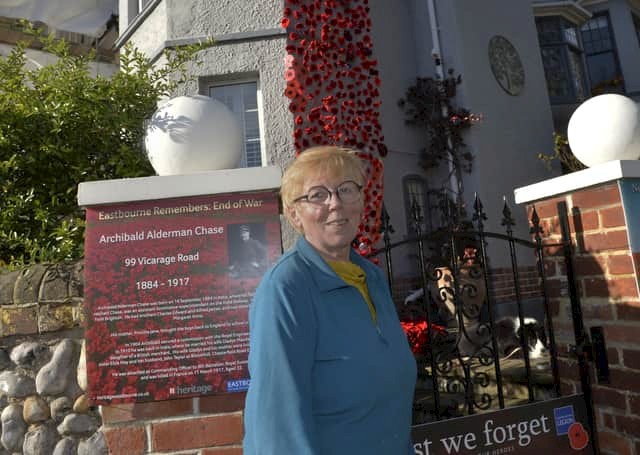 The College is marking Remembrance Day on 11th November at 11am with a two-minute silence across each campus, to remember the fallen war heroes, servicemen and women. The poppy cascade, provided by Eileen, will mark the entrance to the College’s Eastbourne campus ahead of Remembrance Day.

The display was previously on show at Eileen’s home last year as she made local news with her efforts to help raise money for The Royal British Legion.

Eileen’s poppies are crocheted and knitted, with some even made from felt, satin and plastic plates. The piece of artwork also includes signs and poems from nearby neighbours.

Speaking on the display and its backstory ahead of its appearance at East Sussex College, Eileen said, “When I moved to Eastbourne in 2019 I found in the understairs cupboard a screwed up vinyl which I learnt was placed on the pavement outside my house by Eastbourne Heritage, along with many others around the town - each telling the brief story of one individual who served in World War I and had a connection to the area, as a tribute to these brave souls who gave their lives.”

In Eileen’s case, it was Lieutenant Colonel Archibald Alderman Chase, who previously lived in her house.

Eileen added, “I wanted to pay tribute to this particular individual myself, so I spent hours restoring the vinyl as best I could and I put it on our front path, it almost felt like he had ‘come home’ if that doesn’t sound too ridiculous. I then thought these heroes shouldn’t be forgotten heroes, and wanted to take it one step further and had the idea of the cascade, as my house is on the corner with a balcony and would lend itself nicely to such a display. Plus, I’m very close to Gildredge School and therefore get a lot of footfall.

“Together with my friend Sue Storey, a longtime resident of Eastbourne and therefore more connections than I, we reached out to the community through social media, the Eastbourne Herald, WWI and along with various friends and neighbours, the project was underway. The poppies started arriving and there were up to six of us at any one time sitting round my dining table sewing them onto the backing.

“Last year was the first year, but it was always the plan to display it every year. We should never, ever forget.”